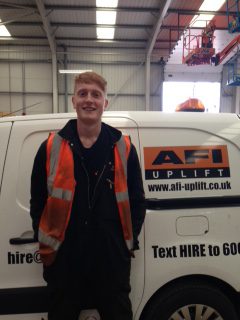 We are committed to providing an outstanding apprenticeship programme that fully supports and develops the skills of our apprentices. Tom Bell is one example of an apprentice who has successfully completed the programme and has developed his career with AFI.

Tom, who now works as an engineer at our North East depot, joined us at the age of 17 and attended the Construction Industry Training Board national construction college at Bircham Newton.

He said: “From day one I received excellent support and mentoring from the North East depot service engineers and from AFI as a whole. I was also given the opportunity to undertake various powered access machine manufacturer training courses and I know after talking to apprentices working at other companies that this is not usually the case.”

“I’m very grateful to AFI for all the opportunities they have given to me in developing my career. I really enjoy being an engineer at AFI – they are an excellent company to work for.” 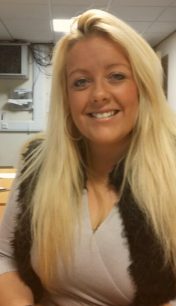 When Donna Hall joined AFI’s North East depot to cover for maternity leave little did she imagine that her career progression would culminate in her becoming an AFI Divisional Director.

Donna joined the company in 2009 as an Administration Assistant during the maternity cover but then went on to hold the positions of Hire Desk Controller, Operations Controller, and Regional Operations Manager for the North East before taking up the post of Divisional MEWP Operations Director in 2016.

During her time at AFI Donna has undertaken a vast amount of training, ranging from standard induction and systems training through to developing skills such as coaching and appraisals. She has also gone through AFI’s leadership development pipeline and has attended a course at the very top level, studying management at the Ashridge School of Leadership and Management.

Donna said: “The opportunities that AFI has given to me to develop my career over the years has been phenomenal. Their mantra is there are no ‘glass ceilings at AFI’ and I can very much vouch that for me this has certainly been the case.” 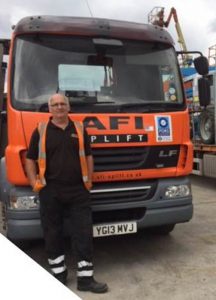 AFI delivery truck driver David Lewis is always prepared to go the extra mile for customers – and we don’t just mean in his truck! As an IPAF accredited powered access machine operator, David will sometimes rise to the challenge if a customer asks if he can confirm that a machine he has delivered will be able to reach the job in question. “I’m happy to raise the boom or scissor and show them that it will be fine for the task that it’s been hired for, and it gives me some satisfaction to do that,” said David. That level of customer service is one of the things that David likes best about his job, together with the variety he gets from delivering all types of machines to a wide range of sites.

And the downside? Well as a driver working from London West depot it’s no surprise to find that David spends an awful lot of time stuck in traffic jams in and around the capital. “It can be very frustrating while I’m sitting there. The worst place is the M25 – it’s the world’s biggest free car park,” he said.

David is pleased about the introduction of AFI’s industry-leading sick pay scheme for drivers. AFI recognised that the drivers were the only employees in the company who had no sick pay scheme and in situations where a driver was off for any lengthy absence it caused hardship with the drop to Statutory Sick Pay (SSP). AFI therefore decided to introduce a scheme where drivers receive their full pay for 22 days and half pay for a further 22 days in any rolling 12 month period. They are eligible for these payments after five waiting days for any period of absence. David said: “People were asking if such a scheme could be introduced, the company looked at it and have now brought it in, which is great news.”

He also welcomed how AFI is always open to suggestions and ideas from its employees: “I put an idea to my director, Steve Williams, recently. He thanked me for it and it now looks like it’s going to be actioned,” he said.

Would you like to work for one of the largest Powered Access companies in the UK with 26 locations in the world? In AFI, we have a range of opportunities, so if you have ambition and a drive to succeed we want to hear from you.

We are committed to putting our customers at the heart of everything we do and this has led to AFI becoming the only powered access company to hold the coveted Institute of Customer Service ServiceMark accreditation.

You can find out more about which cookies we are using or switch them off in settings.

Strictly Necessary Cookie should be enabled at all times so that we can save your preferences for cookie settings.

If you disable this cookie, we will not be able to save your preferences. This means that every time you visit this website you will need to enable or disable cookies again.